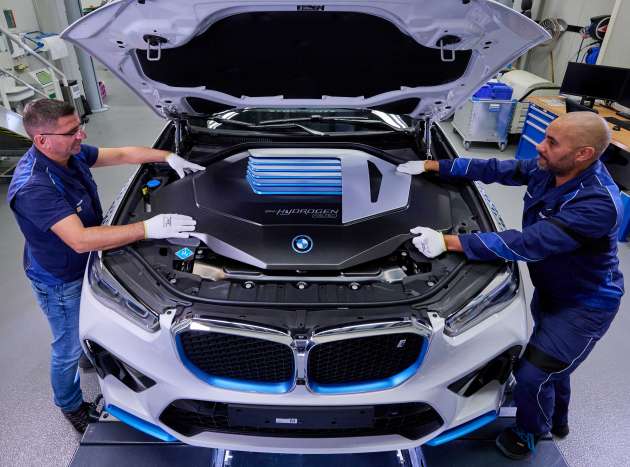 Although car manufacturers have not gone all in on hydrogen fuel cell technology the way that they have with battery electric cars, now and then we get news of a new hydrogen car being developed. This is the latest one from BMW, a hydrogen fuel cell version of the BMW X5 that it is calling the BMW iX5 Hydrogen.

Interesting to see the X5 decked out in zero emissions form because a battery EV BMW iX5 does not exist, instead the electric SUV model positioned above the iX3 is the BMW iX. The iX5 Hydrogen gets swathes of blue around its body, and notably the kidney grille still looks like a grille instead of being blanked out like on the i4 and iX3.

The fuel cell system is in the engine bay. Two hydrogen tanks are stored in the centre tunnel and under the rear seat. A small battery along with an electric motor is positioned in the rear axle area. You might be wondering, why is there still a battery? Yes, hydrogen fuel cell cars are still EVs with a battery. The hydrogen fuel cell charges this battery, and it is also used for brake regeneration.

According to BMW board member Frank Weber, hydrogen fuel cell technology is not dependent on critical raw materials like cobalt, lithium or nickel, so investing in this technology ensures BMW Group has strengthened ‘geopolitical resilience’.

The iX5 Hydrogen will be available in selected regions from spring 2023 as a ‘technology demonstrator’.